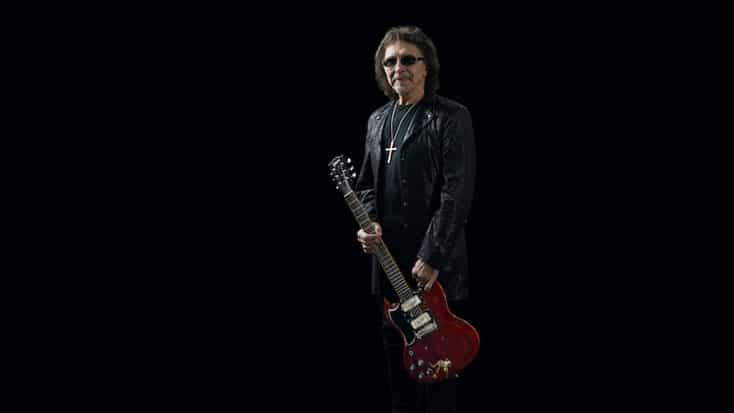 NASHVILLE, TN (March 18, 2020) By leveraging its iconic past and leaning into an innovative future, Gibson has set the stage for the next era of shaping sound for present and future generations, genders and genres of music. Gibson is proud to partner with the legendary guitarist of Black Sabbath, Tony Iommi to create the Tony Iommi “Monkey” 1964 SG Special Replica, a limited edition of his beloved 1964 Special SG. The Tony Iommi “Monkey” 1964 SG Special Replica is available worldwide at Authorized Gibson Dealers.

Watch the new interview with the heavy metal pioneer, Tony Iommi as he describes his unique guitar modifications that create an unforgettable sound:

The Tony Iommi ‘Monkey’ 1964 SG Special Replica is a heavily-modified 1964 SG Special that was used extensively with the original lineup of Black Sabbath and heard on every album and tour of the 1970s. Thanks to the meticulous reverse-engineering and painstaking attention to detail employed by Gibson Custom Shop, 50 exact replicas have been created, 25 right-handed and 25 left-handed like the original, each guitar is signed and numbered by Tony Iommi himself. No detail was overlooked in the construction and aging, telling the complete story of the “Monkey” from the zero fret to the stop tailpiece bushings to the legendary pickups, which were hand-made in the U.K. by the apprentice of the late John Birch. Each Tony Iommi ‘Monkey’ 1964 SG Special Replica includes an exclusive replica of Tony’s silver cross necklace with a coffin case, a replica of Tony’s leather touring guitar strap and a 1960s replica case and a Certificate of Authenticity.

As previously announced, Tony Iommi recently sat down with Gibson TV for the ICONS series for a deep dive into his early years in Birmingham, England, the accident that almost ended his career as a guitarist and his 55-year musical journey with Black Sabbath. Tony Iommi’s career, like the man himself, is universally loved and revered. And while his innovative tuning and playing styles were a major part of his monstrous tones, a Gibson SG named “Monkey” was at the center of it all. Watch GibsonTV’s “ICONS” with Tony Iommi:

For all things Tony Iommi:

For all things Gibson:

Tony Iommi is synonymous with heavy rock, his innovative, de-tuned, dark riffs are considered to be the blueprint for hundreds of bands that followed. Born on February 19, 1948, in Birmingham, England, left-handed Tony picked up the guitar after being inspired by the likes of Hank Marvin & the Shadows as a teenager. Iommi’s musical career was nearly derailed prematurely as he suffered a horrible accident at a sheet metal factory, when a machine sliced off the tips of the fingers on his right hand. Figuring that his guitar playing days were behind him, a friend turned him onto guitarist Django Reinhardt (who lost use of two fingers in a gypsy caravan campfire accident), inspiring Tony to give the six-string another go, with soft plastic tips attached to the ends of his fingers. By 1967, he had played with several blues-based rock bands one of which evolved into Polka Tulk (later titled Earth and then Black Sabbath), with bassist Terry “Geezer” Butler, drummer Bill Ward, and singer John “Ozzy” Osbourne.

Black Sabbath created the blueprint for heavy metal with such incredibly influential, all-time classic releases as their 1970 self-titled debut and Paranoid, 71’s Master of Reality, 1972’s Vol. 4, and 1973’s Sabbath Bloody Sabbath. These albums lifted Black Sabbath to one of the world’s top hard rock bands in the process. Iommi’s guitar playing propelled such metal standards as “Black Sabbath,” “N.I.B.,” “Paranoid,” “Iron Man,” “War Pigs,” “Into the Void,” and “Children of the Grave,” which boast some of the most recognizable guitar riffs in rock history.

Black Sabbath had multiple line-up changes following Osbourne’s departure in 1979, with Iommi being the band’s primary composer and the only constant member throughout its history. All while keeping Black Sabbath touring and releasing albums, Tony released the well-received solo albums Iommi and Fused and formed the successful band Heaven & Hell with bandmates with Ronnie James Dio, Geezer Butler and Vinny Appice. Heaven & Hell released The Devil You Know (2009) to rave reviews and world tours.

In 2011, Iommi published his autobiography titled Iron Man: My Journey through Heaven and Hell with Black Sabbath which went on to make the New York Times Bestseller list.

Black Sabbath’s final studio album and nineteenth overall, 13 (2013), featured all of the original members except Ward. Despite undergoing both chemo and radio therapy treatment for Follicular (non-Hodgkin) Lymphoma, Iommi remained his ever-determined self, and writing for the new Sabbath album continued at his home studio with Ozzy and Geezer in the UK for an extended period. Tony had recovered sufficiently to play a hometown gig in Birmingham, along with headline appearances at Download Festival and Lollapalooza, the mighty Sabbath were back! 13 became a staggering success and reached #1 in the U.S., amazingly the first Sabbath album to do so. It also got to the top in most countries around the world, in the U.K. setting a record for being a 40-year span between #1’s, the longest ever!

Black Sabbath has been ranked by MTV as the “Greatest Metal Band” of all time, and placed second in VH1‘s “100 Greatest Artists of Hard Rock” list. Rolling Stone magazine ranked them number 85 on their “100 Greatest Artists of All Time” while Iommi was ranked number 25 in Rolling Stone magazine’s “100 Greatest Guitarists of All Time.” Black Sabbath have sold over 70 million records worldwide. Black Sabbath were inducted into the UK Music Hall of Fame in 2005 and the Rock and Roll Hall of Fame in 2006. They have also won three GRAMMY Awards, two for Best Metal Performance for “Iron Man” and “God is Dead?” Iommi also received a GRAMMY nomination this year for his work with Candlemass. During their The End Of The End farewell tour, the band played their final concert in their home city of Birmingham on February 4, 2017 and in 2019, the band was presented their third GRAMMY, the Lifetime Achievement Award.