Remote recording in the Karoo

Late 2019 I had the opportunity to be part of a very unique project. The task was simple: record and produce an entire album in 5 days. To make it more interesting, we decided to rig a mobile studio and track it in a farmhouse in the Ceres Karoo. Three guys isolating themselves from the rest of the world in a remote location with no internet just to record an album? Sign me up! After managing a few logistics at work things fell in place. Off we went with a mobile recording studio to the Groot Karoo just outside of Ceres.

The logistics of a mobile recording project can be daunting. Firstly, the location had to be suitable for recording. Fortunately, we aced it. It was a beautiful, old and spacious farmhouse. Each musician had his own bedroom for some privacy. We all contributed to food, wine and snacks. The whole house revolves around a central living room with high wooden ceilings and equally stunning wooden floors. With a few strategically placed carpets it delivered awesome acoustics. The living room chose itself as the perfect location to rig up the studio. We asked Helmut Meijer to manage the logistics around the recording setup and to co-produce the album. With Protools forming the heart of the studio Helmut added a decent set of mics and quality reference monitors. We were up and running in half a day. I had an idea which songs we were planning to record ahead of time, but none of the arrangements were finalised. We decided to arrange on the spot as we were tracking. This is usually not something I would recommend, but it is an awesome experience if you have the right group of musicians in the room. The success of such a strategy is not only dependent on the skills and chops of the musicians but also how well they can work together and put their own ideas secondary to what the song needs.

To fit 10 songs into 5 days we agreed on the following rules upfront:

Without knowing what the arrangements were going to be I had a challenge selecting the guitar gear for the project. It could go in any direction and I wanted to cover as many bases as possible without bringing an entire music store. I settled on 2 electric guitars, 2 acoustic guitars and my Kemper. There aren’t enough compliments I can direct at the Kemper for situations like this. Having the best amps in the world in one box that can be called up at a moment’s notice is a lifesaver. For electrics, I settled on my trusty HSS Stratocaster and a Duesenberg Starplayer. There aren’t many places you cannot go with the combination of these two. Although I brought 2 acoustics, my Martin DCPA tracked so well that it ended up being the choice for most of the acoustic tracks that I laid down. 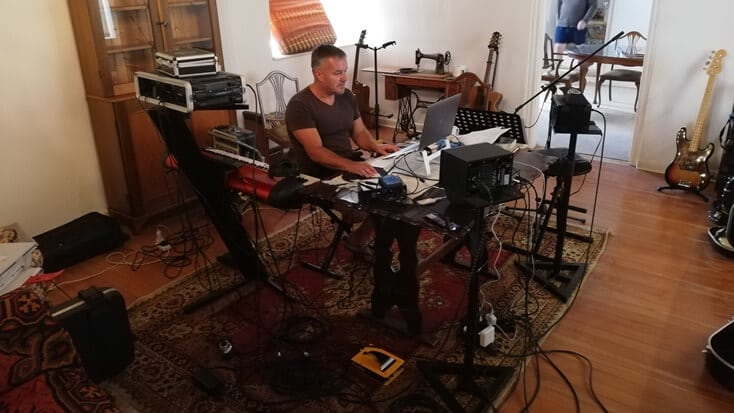 So how did it go? Firstly, we made it. We finished tracking and 80% of the mixing within 5 days. Helmut took an extra day to finalise the mixing and mastering. Yes, we worked our arses off, but we also had enough time for bonding sessions around campfires and shared many bottles of wine. There is something magical in cutting yourself off from the world and focussing on something you are passionate about. It is a rare opportunity in this day and age and a privilege to share with likeminded people. We also got to know each other on a much deeper level and our relationships have strengthened. What happens in the Karoo stays in the Karoo. We launched the album 3 weeks ago and we are all super proud. The lessons learned should you want to tackle something similar:

Will we do it again? Yes, we are already planning the 2nd one!