On the mic with Stu G 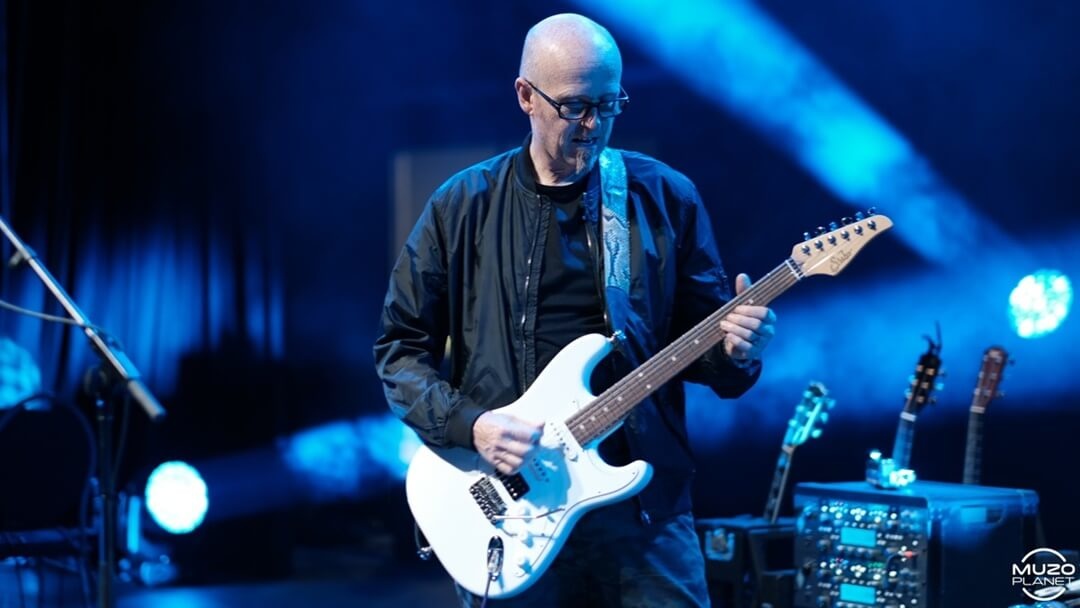 As lead guitarist for the British christian rock band Delirious? Stu G helped shape a new sound for christian music globally. As part of Delirious? he crossed the world numerous times for almost two decades, toured with Bon Jovi and played the Glastonbury festival among others. He is an in-demand session player and producer and started One Sonic Society with Jason Ingram and Paul Mabury. He also recently turned author as part of his Beatitudes Project, which is an album, a book and a film that captures a collection of stories and music inspired by the “Sermon on the mount” in the book of Matthew in the Bible. We caught up with Stu during a recent gig in Cape Town fulfilling lead guitar duties for Michael W. Smith to discuss his former life with Delirious?, the inspiration for his Beatitudes Project and how his christian faith provides perspective on dealing with the low points in life.

MP: From our perspective Delirious? really changed the way in which Christian music was presented. Delirious? changed both the sound and the format in which it was delivered. Did you sit down and plan it that way in the sense that you decided exactly what it should sound like beforehand or was it something that came naturally?

Stu G: I don’t think you ever really set out to do something as drastic as that, but every step along the way we were just trying to have an authentic expression of what was going on within ourselves. When you are writing songs you are not necessarily expecting 50 000 people at Wembley to be raising their hands to it. We’ve really believed that we could tap into something and take it to stadiums or arenas, but we didn’t know how to go about that. So everything happened step by step. We started as the Cutting Edge band in an event of 70 kids from the local area. At that time we weren’t driving around the country in a van playing gigs. It was just a once-a-month event. The songs that Martin (Smith) was writing around that time were blessed around that event. So we started writing together and at the beginning of Delirious? we didn’t want to be defined by the systems and the boxes that were existing at the time. There was no reason for us to be because we never signed to a particular label at any given time. We kept all the control ourselves and every step along the way we got people to help us do that.

MP: Was it difficult at that time? Was there a misunderstanding from both the secular world and the church or were Delirious? well adopted by everyone?

Stu G: The reason we had a question mark behind the name was due to some of the questions we’ve been asked. Like “Are you a rock band or are you a worship band?” The answer to that is “Yes, we’re all of that”. We didn’t kind of define either thing. It was just all one thing. We loved music and the creativity and felt that it was all part of our worship. Sometimes people were cautious of us and our agenda like in the mainstream general market. Sometimes they would be slow to pick up and write about us in the press or have a song on tv or play us on the radio. But at the end of the day none of that matters. The thing was that we stuck around and we kept on doing what we were doing and we ended up playing Glastonbury festival and toured with Bon Jovi and we got to be played on Radio 1. We had hits in the UK and Germany. So I think the thing is that we just stuck to our guns and kept going. I’m not saying that we didn’t feel that it was unfair at times, but such is life you know. There are worst things that can happen to you!

MP: How does your faith impact your perspective on what happens in the world today?

Stu G: I think faith informs absolutely everything about life. I don’t see any space that is sacred or secular. It is just all sacred. I’ve got a friend called David Dark in Nashville and he talks about the fact that there is no secular molecule in the universe. Rabbi Abraham Joshua Heschel used to say that “if God was not there, there would be no there”. Nothing exists without God. Faith informs from writing songs to reading the news to helping the poor to building your house. 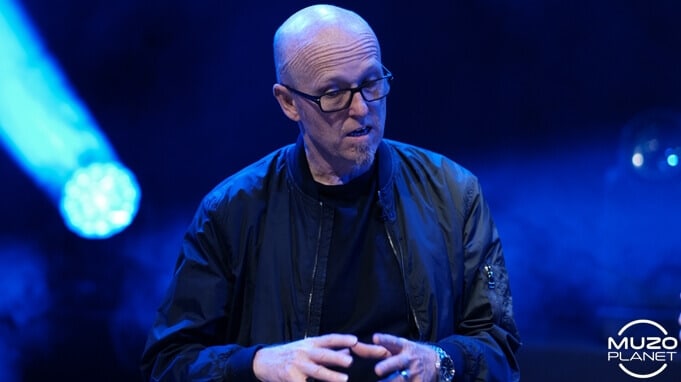 MP: How did your Beatitudes Project come about?

Stu G: Way back, 20 years ago, we were touring America and people would ask you while you were signing their CD to write your favourite scripture. I would always write Matthew 5: 6,7 – the sermon on the mount. That’s always been the most influential scripture for me and the one that I keep returning to all the time. Over the years the beatitudes started to stick out to me – these 8 announcements of where God is blessing. I initially thought it would be a Delirious? album. It would be 8 songs where we could sing about peace-making, mercy, poverty and all this stuff. The other guys were interested but it just never happened. When Delirious? finished – I don’t think anyone really wanted it to finish – I was in my mid 40’s and it just hit me at a low point. I was left in this space wondering whether my best work were behind me. I spiraled a bit downwards and it was in that space that I started to understand a bit more of what blessing is in that when I felt at my particular bottom of life God wasn’t very far away. In fact, he’s possibly closest to us in the ache and the lack and the longing of life than at any other time.

Eugene Peterson in The Message version says “You’re blessed when you’re at the end of your rope”. That really made me think that maybe we’ve got this blessing idea wrong. We shout about how we are blessed and favoured when we pray for a parking space and get one, but Jesus is saying “No. When you are grieving that’s when you are blessed cause you’ve got me”. I started to understand this idea that what this blessing is, is presence. God is on our side when we are at the bottom of life. So that’s where the inspiration for this project came from.

I started talking about this and having conversations about this and little by little I started meeting people who kind of embodied something of this. Google did this study of their employees where they assumed that their most successful employees were going to be the ones that had the highest qualifications and were the best at their technical jobs. But they discovered over 20 years that their best employees were those who showed empathy, listened well and could collaborate with people they disagree with. In our striving to be the best and be successful we have forgotten to integrate and interact with each other and that is what the beatitudes invite us into.

MP: What struck me of some of the stories in the book was that it speaks of a real world faith. It is not a sermon or text book faith but a faith of someone in a world that is very broken. It’s a faith that is not trying to answer difficult questions. It is simply stories of how people are trying to figure this out and what is real to them in a world where we do not have all the answers. Would you agree with this?

Stu G: I am glad you said that. Faith is not just about doing, but there is a lot of doing! We are called to action a lot of the time. I love talking about mercy and I love talking about grace. We beat ourselves up so much that we feel we will never come up to the mark and that we are always falling short. At the end of the day we need to learn to be kind and show mercy and grace to ourselves. Faith is not passive, but it’s not like here’s a bunch of commandments that we have to do, but there are invitations we are called into. I am not a theologian or a scholar or academic in any way. I can’t hold an argument about theology or apologetics or whatever. But I did want to create something that takes a very practical look at the beatitudes. That is how I think. I think in stories and in practical terms like what are the next steps or what can I do? I think that everyone of us on this stage right now are experiencing something in the range of the beatitudes. We can always identify with it and I wanted to put a 21st century lens on it. So I talked to woman as mercy was all about woman. I spoke to a woman that was on death row and woman who were survivors of prostitution, addiction and trafficking and chatted about what mercy looked like to them in the 2000’s where life is really screwed up for a lot of people.

MP: So what is next in the life of Stu G?

Stu G: The Beatitudes Project is not finished yet. We’ve made a documentary film and made a study like a curriculum type handbook that goes along with the film. We’re getting ready to release that online this summer. I’m coming into a season where I am playing guitar for Michael W. Smith and I’ll be on stage with him as long as he wants me to be. I love working with Michael. He is such a great musician and one of the kindest people I know. He’s one of the guys that lives it out and doesn’t just talk the talk. The Beatitudes Project is not about selling as many books as possible. It is actually about creating a platform for me to get out to churches and go to communities to talk about it. I’d love to go to places and show the film, have Q&A’s and do seminars and maybe a guitar clinic. It’s bigger than just a product. Talking in front of people about it I find that there is a passion and energy that is more powerful than just a book. I am really passionate about it and I hope that it sets up the next 10 to 15 years of my working life.

If you want to learn more about Stu G’s Beatitudes Project you can watch the trailer below.