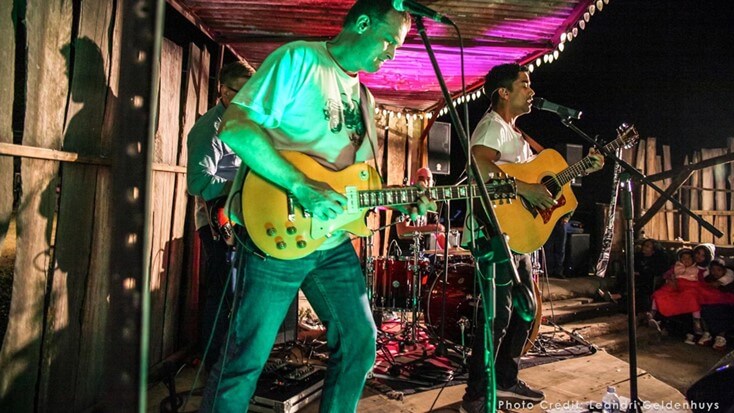 Yip, that’s me in the picture above rocking my Gibson Les Paul Deluxe with The Southern Lights Band. I bought the Les Paul Deluxe Gold Top second-hand in 1992 from a music store in Bloemfontein. The serial number identified it as a 1982 model. I was a student at the time and could not afford the asking price. The solution was to sell my Japanese Telecaster and trade my Ibanez Frank Gambale signature model as part of the deal. For the first year after I got the guitar my entire life revolved around it. That is why I named it after the movie Madame Sousatzka, wherein a music teacher takes over the life of a gifted student in order to make him successful. Since 1992 this guitar has been faithfully by my side. It has played countless gigs, did more recording sessions than I’ll ever be able to remember and has been a consistent tonal reference against which I evaluate all other guitars in my collection. The journey has not always been plain sailing though. It was a combination of love and hate throughout the years, but it is now mostly loved. Here is the story.

Apparently the original owner played in a “Boeremusiek” band. I swear he had acid in his sweat because the back of the neck was worn down to bare wood. It made it infinitely more playable though. The original mini-humbuckers does have a unique sound (I sold them recently). I especially loved the neck position, but the bridge was a bit spiky for my taste. I also battled to even out the volume between the two as the neck humbucker overpowered the bridge pickup. After the latter became too microphonic for the high gain that was required for the band I was playing in at the time, I decided to fit DiMarzio mini-humbuckers. This is where things went wrong.

After I fitted the new DiMarzio’s I could not get the pickup height adjustment mechanism to work. After so many years of sweat (and beer on occasion), the rubber washers and screws did not function properly anymore. During my attempts to get it to work again I managed to strip the heads of the height adjustment screws. For all practical purposes, this put the guitar out of commission. I scoured hardware and engineering shops for months trying to find replacement screws. No luck. I then contacted several music stores in case anyone stocked mini-humbucker mounting rings and fitting harnesses. No luck either. Last option was to import mounting rings and fitting harnesses, but I decided against it. For a while, I used the DiMarzios taped down into the pickup cavities without pickup rings (I kid you not). I eventually stopped playing the guitar altogether.

So this is where I got the idea of P90 pickups. The first set I tried was the Tonerider Vintage 90 set. They dropped into the pickup cavities perfectly. Unfortunately, the sound changed too much from the mini-humbuckers and the guitar just wasn’t the same anymore. I had a spare set of P90’s from a 90’s Ernie Ball Axis guitar (MM90’s) that were lying in the closet. I decided to give them a try. It delivered exactly what I wanted. Warm and complex tone from the neck pickup with a lovely mid-range boost and clear top end from the bridge pickup. They are still in the guitar to this day.

The 2nd issue that developed over time was the saddles in the bridge. They got worn out to the point that the string radius did not match the 12” radius of the fretboard. There were also not enough space available on the saddles to even it out. So I ordered and fitted a new Gibson ABR bridge. It is always hard to explain to someone how big a difference something like a bridge can make. In this case negatively. All the typical Les Paul thickness and bass was gone. All my tones were spiky and thin. After a week of struggling with amp settings, pickup heights and effects settings I reinstalled the old bridge. All the stuff I was missing was back. I still play that original bridge with the same unmatched saddles and probably will until I die.

This model does not have the infamous pancake construction of the late 70’s and early 80’s. No, this sports a solid single-piece mahogany body. This is the cause of the only thing I still wish I could change but can’t – the overall weight of the guitar. At a whopping 5 kg’s it is not a friendly companion for 3-hour gigs. I could manage it easily during my 20’s but now in my mid 40’s, it is not a joke to pay a chiropractor after every gig. The Les Paul Deluxe is now relegated to recording duties mostly, but I use it for about 80% of all my recording and session work. It sits beautifully in the mix, can cover a multitude of styles and sounds and the intonation is spot on. I have other lighter and more charged-up options for playing live (Stratocasters and a Duesenberg Starplayer) but this Les Paul is the guitar I always come back to. The natural nicks and wear marks are a testament to all the gigs and recording sessions that were delivered successfully over the past 27 years. It is still my “home” and will probably remain by my side for as long as I live. The things I experienced and the memories I collected with this guitar trumps most relationships I had with people. I respect this piece of wood like I respect my closest friends. Long live Madame Sousatzka.