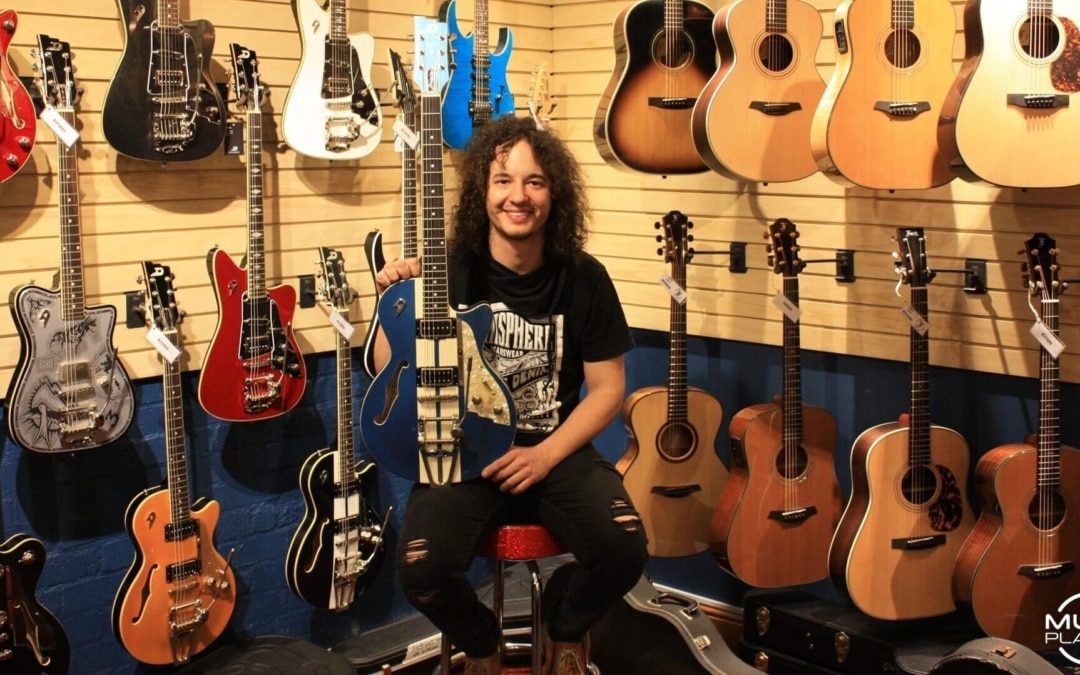 Jeandré Schultz is a guitar player’s player. At almost 26 years of age (at the time of publishing) he came a long way from playing in his local church in Kimberley to holding down the lead guitarist role in Karen Zoid’s Republiek van Zoid Afrika band and being officially endorsed by Duesenberg Guitars and Ernie Ball Strings. There weren’t a lot of money for gear growing up so his sound and style were formed by trying to emulate certain effects with his fingers or the guitar’s control knobs.

His first multi-effects pedal was a Korg Toneworks model and for years that was “the best thing ever”. He had to learn it inside out to get the most from it and in the process learned valuable tricks on how to get decent tone from almost anything. Guitar-wise he started on an Ibanez SA model, moved to a Cort Source (335-shaped) model with Seymour Duncan pickups followed by numerous Stratocasters. After he played the Duesenberg Mike Campbell model he sold all his guitars to fund the purchase. He found “the one”. 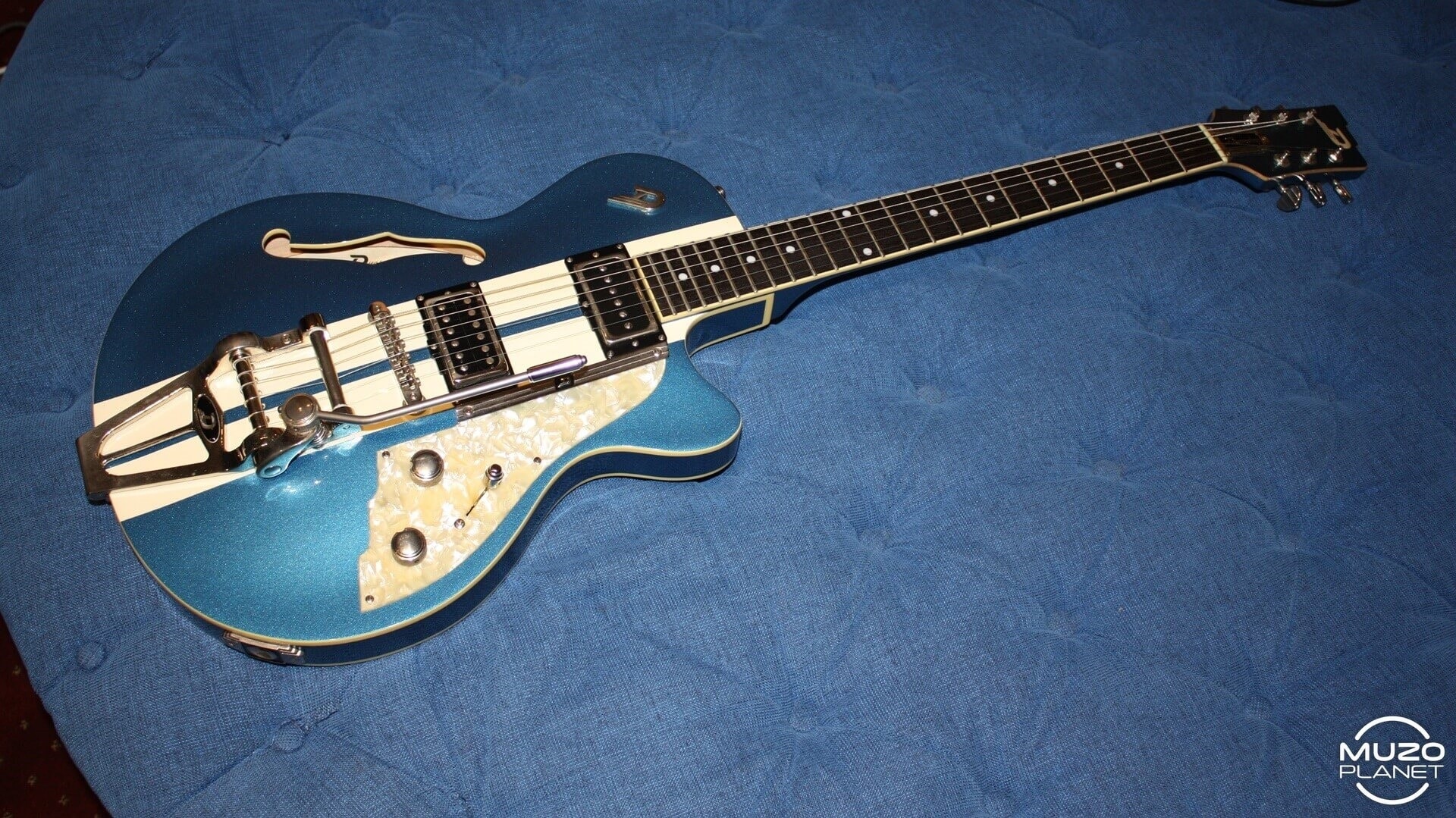 Ever since Jeandré first played the Duesenberg Mike Campbell model it became his number one instantly and remained in that coveted position since. In fact, he now plays Duesenberg guitars exclusively when it comes to electric guitars. Apart from feeling perfect in his hands in terms of balance, neck shape and overall feel, Jeandré also loves the styling and luxurious look. The guitar is completely stock apart from a retrofit scratch plate. It sports a P90 pickup in the neck position and a Grand Vintage humbucker in the bridge position. Another factor that counts in the guitar’s favour is the tuning stability, even after serious vibrato abuse. Jeandré strings this one with 11 – 48 gauge strings. 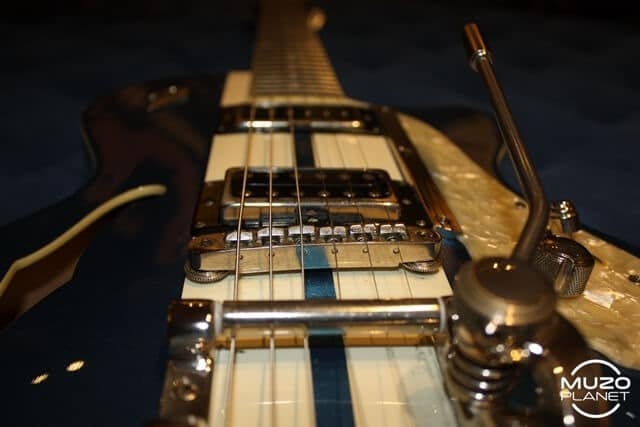 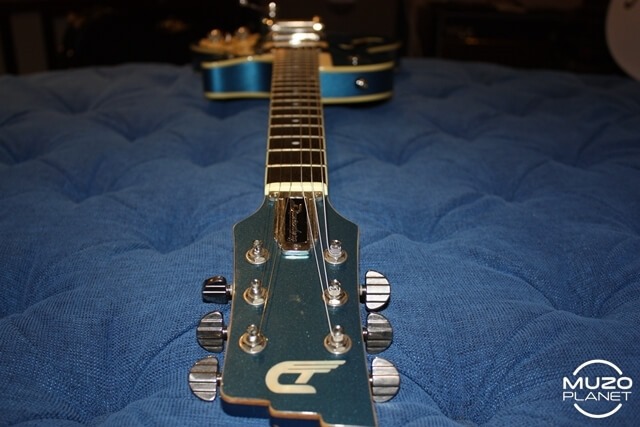 There were four days that Jeandré was separated from his number one – an experience he does not want to repeat. The guitar got stolen a while back by gangsters in Cape Town. One of his guitar-playing friends were contacted to purchase the guitar for R4000. His friend visited the gangsters and put in an offer. While on their way looking for an ATM (with the guitar in the back) his friend kept his cool and drove to the nearest police station. 4 days after it was stolen Jeandré was reunited with his number one.

During those 4 days Jeandré got a Duesenberg Paloma finished in sparkling red. 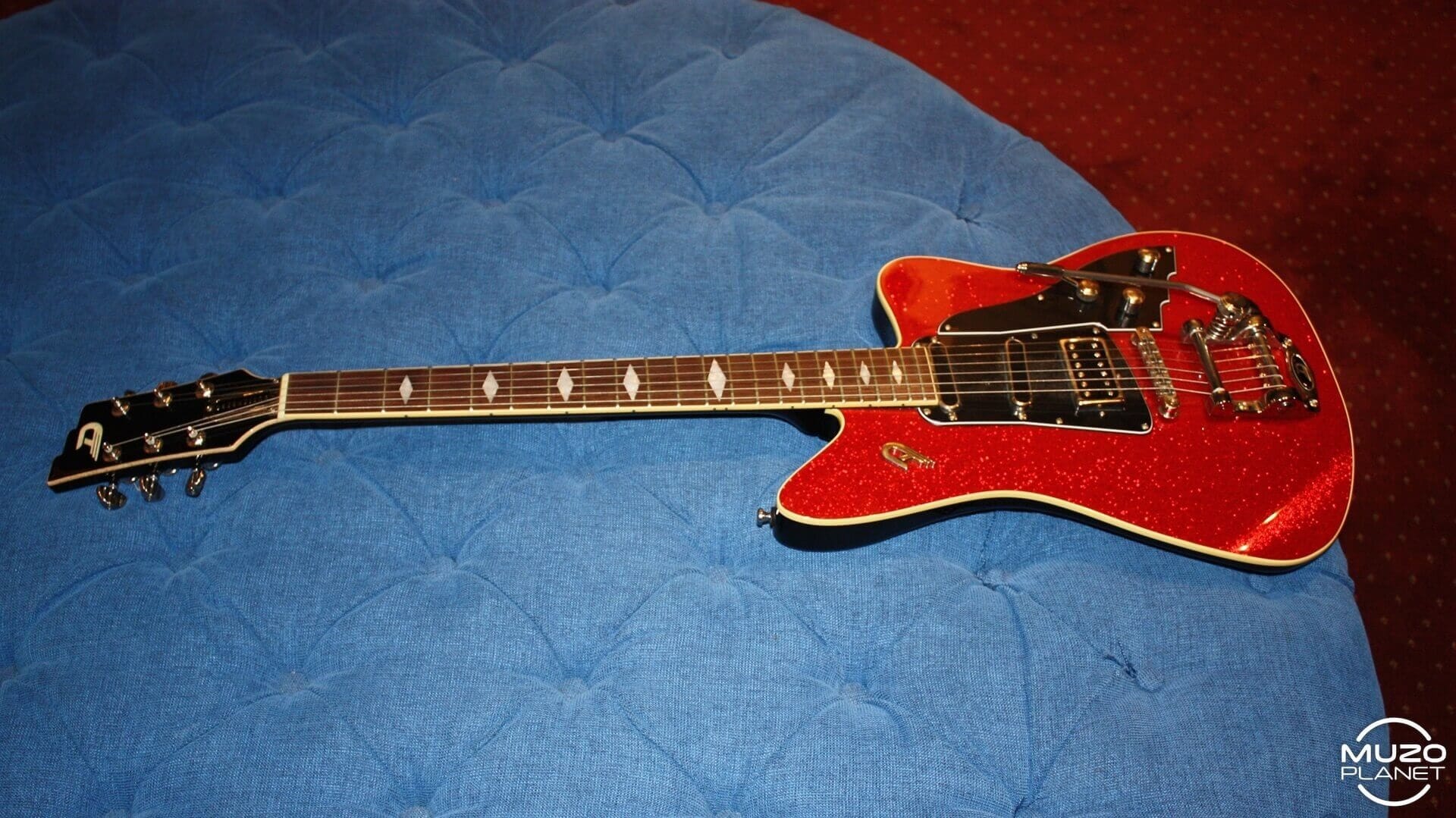 He strings the Paloma with 10 – 46 guage strings. Jeandré describes the Paloma as a Ferrari: “It is quick around the corners and absolutely effortless to play”. The Paloma has much more of a Stratocaster/Telecaster sound due to the single coils and is the one he uses for the Zoid Afrika gig. 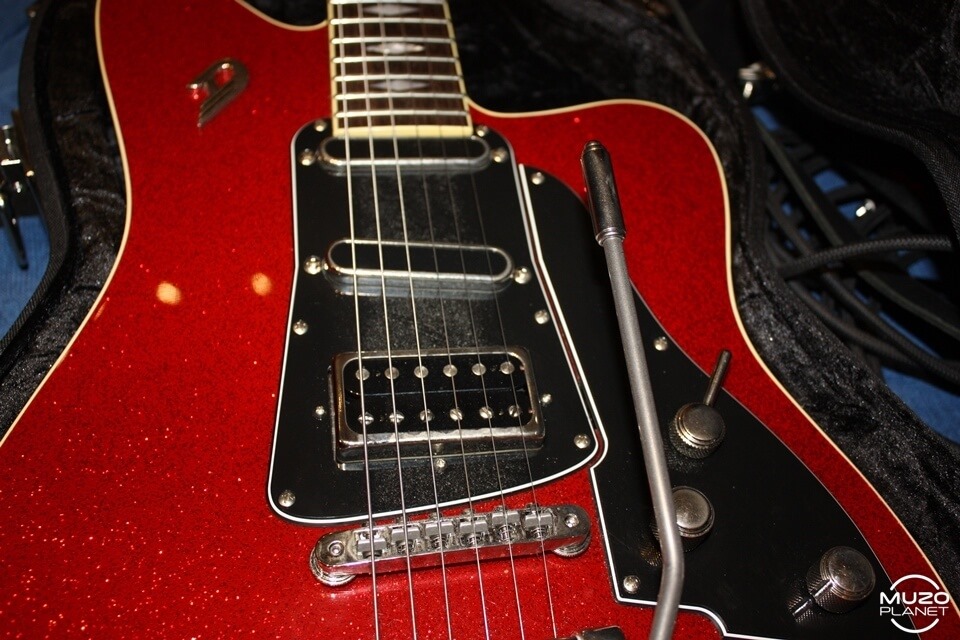 On the acoustic front he uses a Fender Paramount acoustic which Fender graciously sponsored. With the right setup and strings Jeandré finds it to be a good allrounder with a great tone. 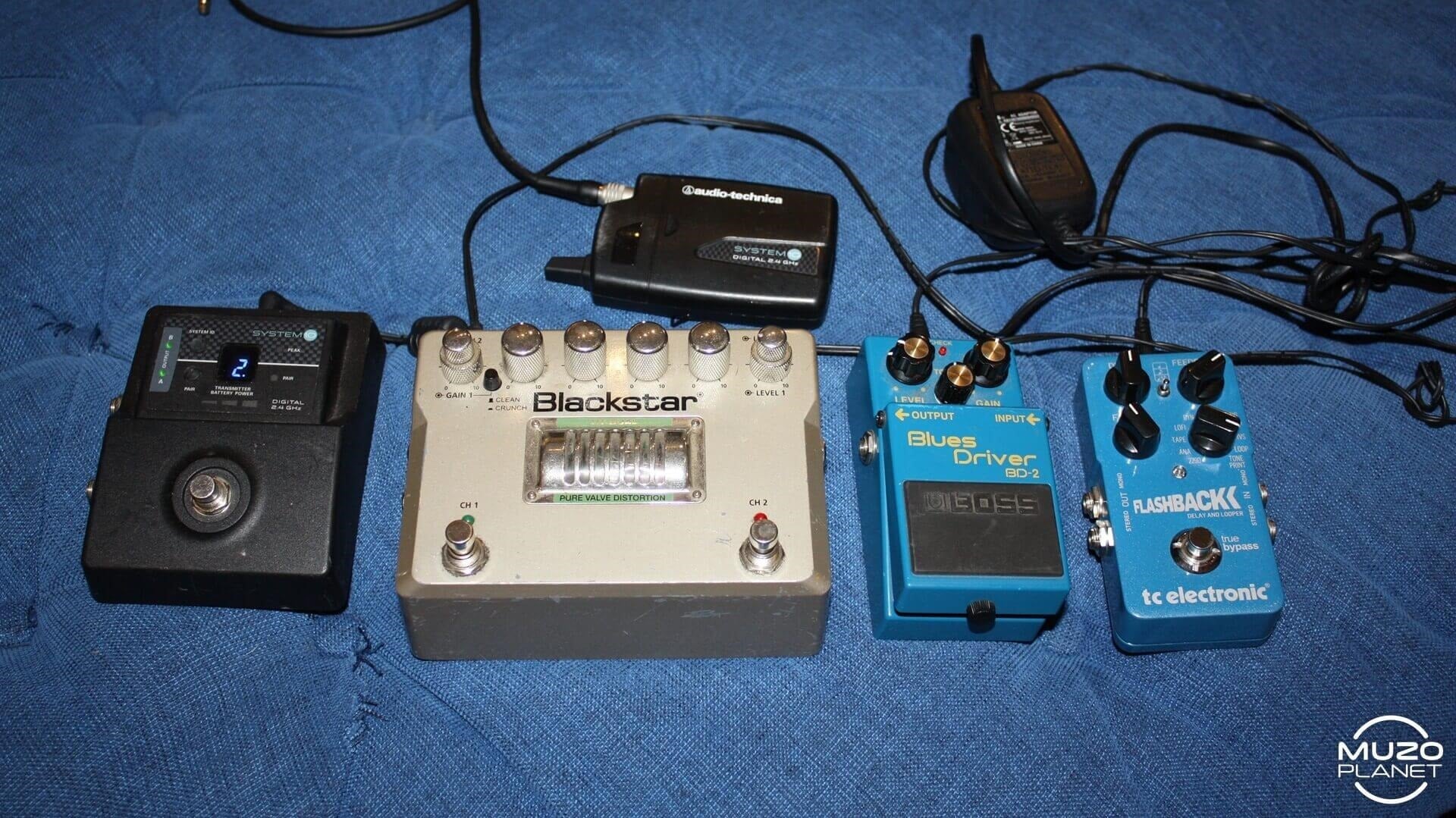 Jeandré’s signal chain is as follows: From the guitar into an Audio-technica ATW-1501 guitar wireless unit. He could not stop singing this unit’s praises. It has two outputs which he sometimes uses to run two amps simultaneously – one clean and one with effects. From the wireless unit the signal goes into a Blackstar HT-dual which he describes as the core of his sound and the reason for it “being so huge”. He uses both channels on the HT-dual, one is set for distorted rhythm duties and the other for leads. Jeandré frequently uses the emulated output of the HT-dual for recordings.

Next in line is a Boss Blues Driver BD-2. He uses it sparingly for low drives. For some gigs it does not get used at all, although he always keeps it in the effects chain. Last in line is a TC Electronic Flashback delay and looper. Jeandré loves the Toneprint function and uses the Toneprint editor software to dial in his tones and BPM’s exactly the way he wants. He also loves the character of the pedal and it comes in handy for late night looping duties when “you feel bad about life”.

Jeandré’s biggest tone shaper however is the volume knob on his guitar. He uses pedals to get the fundamental tonal base right. All the various tonal shades from there is done with the volume pot. He also does not believe in power bricks. He never had the money growing up to buy one and the various voltage requirements of his pedals make it difficult to find a single unit to power all of them sufficiently. Each pedal has its own power supply and there is no pedal board in sight. Each pedal has its own power supply. Exactly how he sets it up during gigs and studio recordings.

He also does not like wah-wah pedals. No jokes. All other requests for weird sounds (chorus, vibrato, tremelo) he manages by emulating the effect with his fingers, playing action, playing position or the guitar’s volume and tone controls. No other pedal or effect units are added to the chain in case he must come up with something that his current pedal selection does not cover.

Jeandré is also endorsed by Ernie Ball Strings, specifically the Paradigm sets. He has a self-confessed “heavy” right-hand action and these strings “understand” him. He has never broken one yet. Keep in mind that he changes them at least once every two weeks. He uses two picks, Dunlop flex 0.88mm for rhythm and the Jazz 3 Large pics for solos. Yes, he swops between them mid-song for the rhythm and lead sections respectively. I am not kidding!! He keeps them in his pocket and switches between plectrums at the speed of light. Seriously. Jeandré is not too tense about guitar cables, although he still uses the same Dimarzio cable that his dad bought him 8 years ago. He uses MXR patch cables with pancake jacks.

Jeandré uses a Fender Hot Rod Deluxe amplifier (with the snake skin cover) on the clean channel only. He sets the EQ flat (Bass, mids and treble all at 12 o’clock. The tone stack on the HT-dual is also set flat). The channel volume is usually on 2 for gigs and the presence is set according to the venue. Reverb lives between 2 and 3. In the studio he prefers 6 to 7 mics on the amp. Usually a ribbon mic at the back, condenser in front, a mic about a meter away, another 2 meters, one 5 meters and another about 10 meters. All these are then blended during mixing to find the perfect room sound. In the studio he always records with two Hot Rods, one running clean and the other with effects.