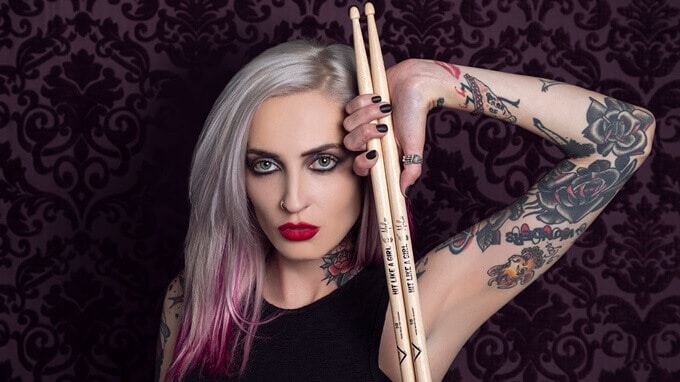 Hit like a girl is an annual global drumming contest for female percussionists. It was conceived by David Levine of TRX Cymbals who felt that the music products industry was not serving female drummers. The purpose of the contest is to place the spotlight on female drummers and percussionists and to encourage drumming and lifelong musicianship for girls and woman. Hit like a girl is a world-wide contest (woman from more than 50 countries have entered in the past) and woman of all ages can enter. In 2018 the contest allowed entries on Drumset, World Percussion, Concert Percussion and Marching Percussion. We spoke to Mël McFail, spokesperson for Hit like a girl 2019, and D’Arcus Currie, winner of Hit like a girl 2012.

MP: Why are you part of the Hit like a girl contest?

Mël McFail: For me its all about awareness and letting other young females know that they can do anything. They can drum. Every female I have spoken to have the same story in that someone in their lives told them that they can’t drum. My own mother told me that drumming wasn’t for girls. I didn’t even know that there were female drummers until I was a teenager. It’s really important to let other girls know that they can do it and that its not for men only. My father was a full-time musician and I was always air-drumming. One day my dad came out with a flute and I was “what the hell is this?”. He’s like “your mom wants you to play the flute”. At age 30 my mom was still asking me “are you still doing that?” She is proud now because I was just like “I am going to do this whether you like it or not”.

MP: Is that part of your message to other woman and younger kids?

Mël McFail: Well maybe even to other parents. I almost got a full right on Berklee and my parents did not want me to do it because they were afraid I would be a failing musician. I totally get that but you do not know the potential your kids could have if you don’t give them a little support. I am so envious cause there is this amazing little girl at age 9 in Japan that is phenomenal and that is from supportive parents. It is not that mine were not supportive or did something wrong, but it is a generational thing.

D’Arcus Curry: My mother is like a strict 8 to 5 person. She is always like “when are you getting a real job? You can’t pay your bills with that”. So I almost had to prove a point as drumming is all I do. It pays my bills and takes care of me. I think the Hit like a girl competition exposes woman as well. A lot of people don’t know how many female drummers there are internationally. Woman were not exposed to it until Hit like a girl came along and now everyone knows that woman can play.

MP: Why do you think people tell girls that they can’t drum?

Mël McFail: I think it’s because they don’t see it. I can’t tell you how many times I have walked up to a gig and everyone thinks I’m the drummer’s girlfriend just carrying his stuff. It’s actually rude because he should be carrying his and my drums! You just have to laugh about it. It’s also great to finish the gig and have those same people come and fall at your feet afterwards. 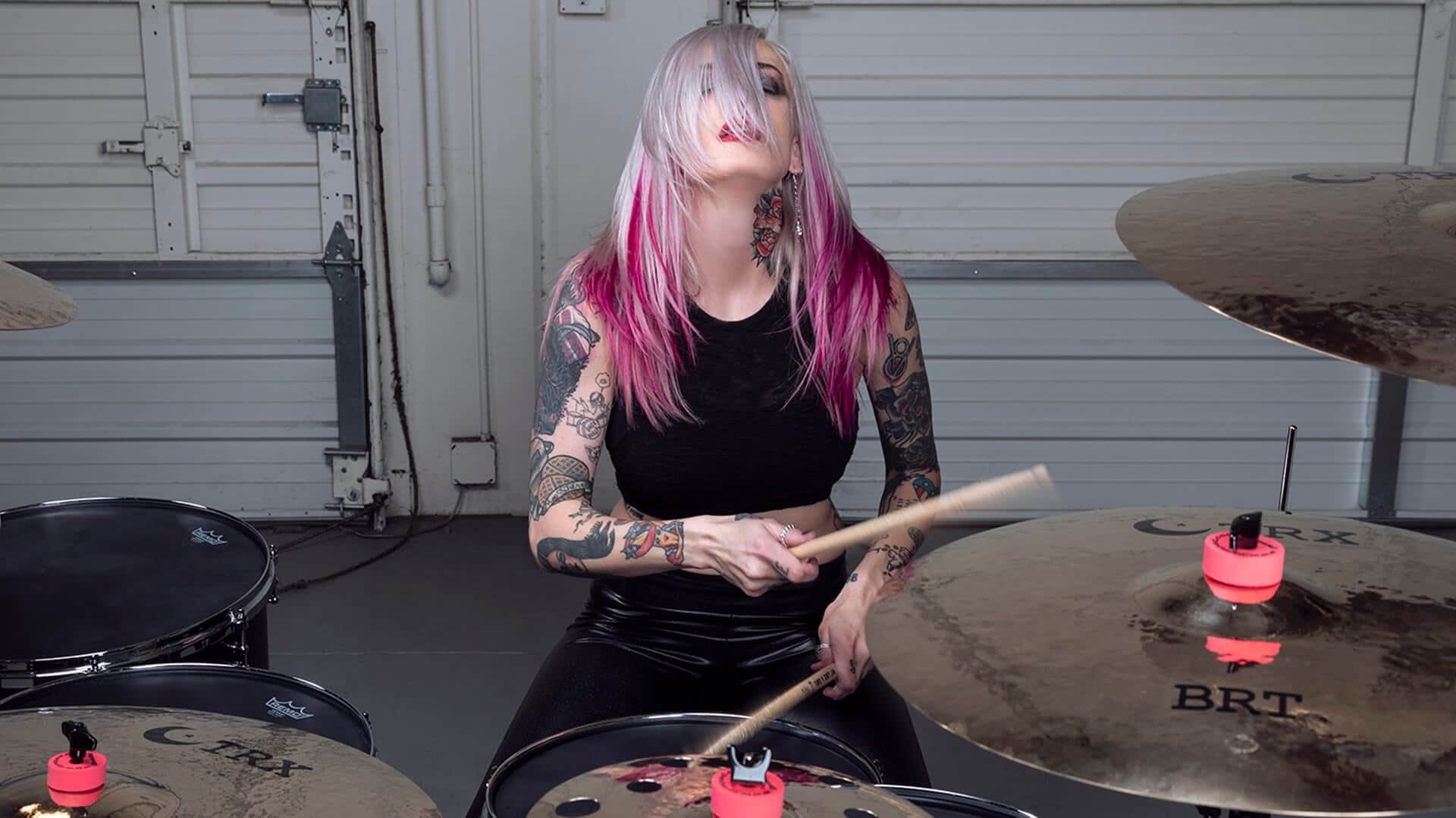 MP: Is it easy to make the transition from being judged beforehand to just putting everything into the gig?

Mël McFail: It’s not easy cause you can see it in the people’s faces. I have played sold-out crowds and I have played to ten people and you can see it. Like with L7 it was difficult because I had big shoes to fill and had only a week to learn an hour and a half set. It also comes from within because you can be very hard on yourself. I know I killed it but I put all this pressure on myself. I just think you notice the judgmental side more as a female but you just keep going.

MP: Do you think it’s the same with other instruments?

Mël McFail: Definitely. I drummed with Nita Strauss for a while and saw the stuff she was dealing with. It’s all over the industry regardless of the instrument.

MP: Mël, how did you become the spokesperson for Hit like a girl?

Mël McFail: David (David Levine, owner of TRX Cymbals – ed) heard about me through a friend. Usually he’s had younger females representing the contest, but I guess he wanted somebody a little older to show the girls what you can be. I have two clothing brands that I run so I could also help with merchandise and the marketing aspect of all that kind of stuff. It has been fun and I am all in. I’ve got amazing support from all the sponsors; TRX Cymbals, and I am talking to Remo and then Vater. I have been playing Vater forever and being part of the Vater family now is amazing. It is amazing what Dave and Hit like a girl have done for me over the past 2 months alone.

MP: How long has Hit like a girl been going?

Mël McFail: Since 2012 so D’Arcus was the first winner. Next year will be the 8th one.

MP: So D’Arcus, did winning the Hit like a girl competition change anything for you? If it did, what was the impact?

D’Arcus Curry: Definitely. For me it started my career. I actually wanted to quit playing drums at that point. After the competition I thought that I can actually do this.

MP: So how does the competition work?

Mël McFail: It is international and online video-based, so you enter your video online. Submission for the next contest will open on the 1st of March 2019. There are different age groups and categories. The categories are based on style. There is a panel of judges working through all the submissions and choose the eventual winners for each category. One of the previous winner’s video was actually submitted by someone else!

MP: Is everything judged from the one video that contestants submitted or are there more submissions along the way?

D’Arcus Curry: It is all done from just the one video submission.

MP: Is social media a big part of what you do?

Mël McFail: D’Arcus and I have something in common that we both almost quit. I didn’t post my drumming until the past few years and I wouldn’t have gotten anywhere if I didn’t use social media. A lot of my friends did not even know that I was a drummer and I have been drumming all my life. When I started posting my stuff somebody showed David from TRX Cymbals my stuff and that is how I ended up here. This day and age it is all about social media presence and endorsements. It is hard to track down different companies and reps and to prove yourself. Winning a competition like Hit like a girl gives you credibility to obtain those endorsements and maintain your career. When you win you get loads of gear and deals.

MP: Is there any pressure to endorse TRX Cymbals just because David is involved with Hit like a girl?

Mël McFail: He is not biased at all. Calsey Torey (2018 winner of Hit like a girl for the 18+ category) plays Sabian and I played Zildjian. I made the switch because the TRX’s sounded better to me. They are high contrast and works better for my punk and industrial stuff. They really cut through both live and in the studio.

MP: So who are your drumming influences?

D’Arcus Curry: My brother is my number one influence. Dave Weckl, Vinnie Colaiuta and Aaron Spears. When I first saw Aaron I was thinking “what is happening?”. He is just so inspiring.

Mël McFail: I grew up in the 90’s and I didn’t even know that there were female bands. Everything was just pop at that point and you did not see female musicians. I love Tommy Lee whom I got most of my style from. He has a very “showy” style and I just love that. Andy Granelli from The Distillers is just amazing. I wouldn’t be drumming if it wasn’t for him and he is a very good friend of mine now.

MP: So who are the female drummers that everyone should check out? Who are the pioneers? Pioneers like Weckl, Vinnie, Chambers or Gadd?

D’Arcus Curry: Well I listened to the guys first, but Cindy Blackman definitely. Then there is a drummer called Sheryl Harper from Atlanta who is just the most powerful drummer you have ever heard.

Mël McFail: For rock drummers I would definitely have to go for Samantha Maloney. She was in Hole and Eagles of Death Metal and also with Mötley Crüe for a minute. I was in Californication for a season as a drummer and she got me the gig. She has a production company now and has a band called Chelsey Girls which is a cover band in LA. I used to sneak into the club when I was 17 and watch them drum. Then definitely Dee Plakas from L7. She has a really interesting style and it was an honour for me to fill in for her.

MP: So what can other female musicians do? There is hit like a girl for drummers but what about the guitarists or bassists?

Mël McFail: For any female musician it would be to just be comfortable in yourself and own your craft. Bring awareness to other musicians and kids. Be active on social media and put videos out there. Promote yourselves.

D’Arcus Curry: I think YouTube is key. Get a channel and just post videos of you playing. Someone will see them. You know men don’t put limits on themselves. If they want to do something or play a specific instrument then they simply do it. But a lot of limitations are put on girls that you can’t do this or you can’t play that. The key is to simply not put a limit on yourself and simply go for what’s in your heart. Practice. If you know a drummer that you like, then practice what they do. Take stuff from them but learn why they do what they do so that you can incorporate it into what you do. If it wasn’t for drumming I would not have been where I am today. So if you have an itch to do something, just start.

MP: Where can people go to learn more about Hit like a girl?

Mël McFail: You can vote. You can also spread the word about the competition and our social pages. Share and repost the videos.

MP: We only see the success stories. We see you and the other musicians that are doing well but we don’t see those who are really struggling.

Mël McFail: I had to work at Starbucks in between tours once. I would rehearse the whole day, get two hours sleep and then go work at Starbucks with shitty customers. This industry is not what it was even a decade ago. It is not uncommon for people to have jobs and be a musician. I have two companies that I run and I also drum. It is however still possible so you don’t want to deter anyone from playing drums or being a musician. I sign a lot of drum sticks for girls and you never know what impact that can have on someone. Girls would come up and say “you are so cool and you play with L7”. I don’t think about it that way but maybe I just inspired somebody.